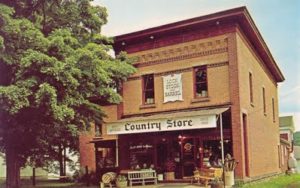 The Ellington Farman Library was created as a free reference and circulation library with funds left in a bequest of approximately $40,000 from Laura Farman Heydenreick upon her death in 1921.

The library received its Certification of Incorporation from the State of New York in January 1922. The first location was a tiny one room building on West Main Street.  The building once housed the law office of Theodore Case and was donated by Lucy Case and Cora Hill.   Following renovations, the library opened on August 12, 1925 with Miss Grace Farman as the first librarian.

The library joined the Chautauqua-Cattaraugus Library System on October 22, 1960.

In September 1972 the library moved to the former Ellington Grange Building on the Town Square, previously the Bailey and Son Dry Goods Store.  Volunteers completed most of the required renovations.  After nearly 30 years at that location, it became evident that this building no longer suited the needs of the library, and a search began for a new location.

On October 8, 2003 the Board of Trustees took over ownership of the former Lock, Stock, and Barrel Country Store located on the corner of the Town Square, previously the Red and White Grocery Store and the Eigenbroadt Grocery and Hardware Store.  The purchase cost of $83,000 was funded by a term loan from HSBC Bank.

On August 1, 2006, the loan for the building was paid in full, with funds received from local foundations and community donations.  A community celebration was held on October 1, 2006, and a plaque was unveiled in appreciation of the multiple donors

Activities to bring the library’s lending procedures up to date in the age of technology began in late 2007.  By the end of 2008 all circulating items were bar coded and entered into the CCLS automated system.

By the end of 2011 all library owned items considered to be of historical interest had been inventoried and placed in long term storage containers.  A master list was made to enable easy accessibility for use by patrons.  Policies and procedures were developed for accepting future donations to this collection.

Plans for additional major renovations, including demolition of the back section of the building, began in 2008.  A groundbreaking ceremony for reconstruction took place on October 22, 2010, with representatives present from all funding agencies.  Construction included a large multipurpose room and a new kitchen, bathroom, and basement, with much of the work completed by Brainard Builders.  An Open House to celebrate the new addition was held on September 18, 2011.

By January 2012 it became evident that major roofing repairs were required.  Work was completed by Advanced Roofing in August of 2012, funded by a bequest from the estate of Helen Johnson.

In 2017 the library  completed an extensive restoration project that included work to the outside of our building, as well as an upgrade in our electrical system and a new air conditioning system. The building restoration project was done by Tri-County Restoration from Westfield, NY. This project included power washing the building, spot routing of mortar joints, repointing of the bricks and waterproofing the building. They also replaced old and rotten wood around the windows and the soffits and caulked around each window. The final step was scraping and painting the windows, soffits and the front porch. Ahlstrom Schaeffer from Jamestown, NY did our electrical upgrade work which included moving our electric service meter. Jamestown Heating and Air of Frewsburg, NY completed the installation of a Lennox air conditioning system.

The Board of Trustees is pleased to be able to offer a library that is not only structurally sound but a beautiful addition to the community of Ellington and an enjoyable facility for our patrons’ use. 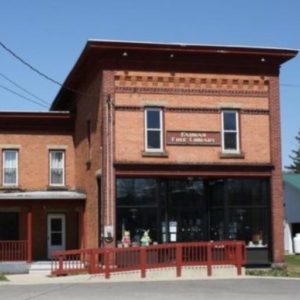